OUR PLACE IN HISTORY

A brief history of fire

Vigile or Spartoli with shield and bucket

NKM Fire Protection was established in 1979.

NKM may have been around for a few years, but let’s look back a bit further.

There’s some evidence of organised fire fighting in ancient Egypt dating back to the 3rd Century BC, but the history of fire protection effectively began in ancient Rome.

To combat the frequent  fires and conflagrations in the eternal city, the Emperor Augustus instituted the Vigiles in 6 AD as a public fire-fighting force. To raise the necessary funds for the Vigiles a 4% tax was imposed on the sale of slaves.

The Vigiles (or Watchmen) were tasked with patrolling the city streets, keeping their eyes and ears open and raising the alarm if they detected any sign of fire. They were also known as Spartoli or “little buckets” because that’s what they used to carry water in to put out fires – though they were also equipped with fire engines and pumps, hooks (for pulling down burning material), picks, mattocks and axes, as well as some more serious gear, such as ballistae for knocking down burning houses to create firebreaks.

In the 1650s watchers were deployed in New York to walk around the streets looking for fires, with buckets on ladders and ringing bells to warn the community.

By the 1800s, fire warning systems became a little more advanced with the placement of bell towers around towns and cities to raise the alarm in the event of a fire.

In 1852, the Americans Moses Farmer and William F. Channing designed the first mechanised fire alarm, consisting of two fire alarm boxes, each of which contained a telegraphic key. When someone detected a fire, they would crank the handle that was attached to the fire alarm box, which would then send the details of the fire alarm box number to a central alarm station. As soon as the telegrapher at the station received the message they would notify the fire department response team of the box location. 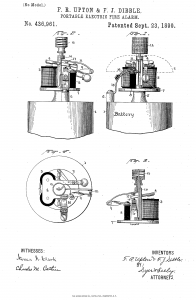 To quote from the smoke detector online blog:

In its original design, there are four major components to the first ever wireless fire alarm. There is the battery, the bell-dome thereon, the magnet in an open circuit, and a thermostatic device. Using simple terms to explain how this invention worked, the thermostatic device detects an abnormal amount of heat due to smoke or fire with the “thermostatic coil”. After the maximum temperature limit is detected, the battery creates a closed circuit with the magnet and attracts its armature, brining the bell hammer against the bell dome, alerting those present in the facilities that there is a smoke or a fire present in the room. In the patent of the portable electric fire alarm it states, “Our object is to produce an alarm complete in itself, simple in construction, without complicated circuits, and which shall not require constant attention.”

In 1920 Hochiki made a major breakthrough by developing the world’s first ‘intelligent’ addressable manual call point and installing Japan’s first public fire alarm system in Tokyo. Hochiki’s system comprised a number of points installed around the city linked to a central fire station. Because the points were addressable, it was possible to know immediately in which vicinity the fire was.

Most fire detection and alarm systems operate on the same basic principles. If a fire is detected, then an alarm is triggered. This warns building managers and occupants that there may be a fire and that evacuation may be necessary. Some systems include remote signalling equipment which can alert the fire brigade or a remote monitoring centre.

Fire can be detected by smoke detectors, heat detectors, flame detectors, carbon monoxide detectors and multi sensor detectors, or an alarm can be triggered at manual call points (break glass). Alarms may consist of bells, sirens, horns, lights or a combination these. Two power supplies are required, generally a mains supply and batteries providing (at least) 24 hours back up.

In conventional systems, detectors are hard wired into a circuit or zone. They signal fire or fault conditions to a control panel by changing from a high to low impedance. The panel detects this impedance change by current monitoring and identifies the zone. Individual detectors cannot be identified.

Addressable systems incorporate hard wired loops and each device has a unique address code. The control panel carries out a polling routine in which each device is interrogated in a programmed sequence. Devices respond with a status report which, as confirmation that the correct device is responding, includes its own address code. Intelligent systems give advance warning of a developing hazard and pinpoint the individual device raising the alarm. It is possible to follow the spread or progress of a fire as individual detectors report conditions in their area and this could allow a phased evacuation and precise direction of fire-fighting teams.

NKM Fire Protection started life in 1979 and was incorporated as NKM Fire Protection Ltd in 1981. The company has since been at the cutting edge and blazed a trail across Kent and the South East, keeping abreast with the latest technology, latest industry standards and the latest fire safety legislation – and trying to stay ahead of the competition without compromising our standards or our integrity.

Though conventional systems were the mainstay of fire detection – and such systems continued to develop in sophistication throughout the 20th Century – modern addressable systems emerged in the 1980s and became the preferred option, thanks to further technological advances.

NKM installed one of the first addressable fire alarm systems in the country in the mid 1980s.

The first modern wireless systems appeared in the 1990s. The best wireless systems are every bit as robust and durable as wired systems, they just don’t have any wires. Detectors and call-points are connected to the control panel using wireless (radio) signals.

Apart from reducing the need to run cables to each individual device, wireless fire alarm systems are ideally suited to listed buildings and heritage sites or any other location where the running of cables may be impractical or intrusive or may disturb room aesthetics.

In some instances conservation bodies prohibit the installation of cables within protected buildings and wireless fire alarm systems may be the only solution to allow the building to comply with current regulations and standards.

Another huge benefit of wireless fire alarm systems is the vastly reduced installation times. As each device is battery powered and does not require a cable to connect it to the fire alarm system, a single device can be installed in around 30 minutes.

Whereas a wired system (for a school, for example) may take several weeks to install, the wireless equivalent could be installed and commissioned in as little as a week – which means they can be fitted in school breaks, like half term.

NKM was one of the first companies to see the potential of wireless systems and is now an approved partner and installer of EMS wireless fire alarm systems.

Before designing and installing any fire detection and alarm system, it is important that a thorough assessment of need is undertaken.

In the UK, since the introduction of the Regulatory Reform (Fire Safety) Order, 2005 this is now a matter of law.

If you are in control of any part of a commercial premise, you are under a legal obligation to carry out a detailed fire risk assessment to identify risks and hazards in the premises. That doesn’t just apply to business premises (and schools), it also applies to many residential premises, particularly where there is shared occupancy.

In terms of fire detection and alarm system design, the fire risk assessment will (or should) also specify the level of protection required.

The British Standard BS 5839-1 is the code of practice that outlines the design considerations for the appropriate system for each level of protection.

For more than 30 years BAFE have been developing schemes for UKAS accredited Certification Bodies to assess and approve fire protection companies to recognised quality standards.*

If you require fire protection services for your premises then YOU NEED BAFE to be sure that the companies that provide them are competent, meet all the appropriate standards and have been regularly, independently audited. Whilst this certification process is not mandatory, registered fire protection companies have demonstrated their quality commitment and are confident in their ability to provide the highest service possible.*

NKM Fire Protection Limited is regularly audited by the BSI and has been accredited to BAFE SP 203-1 for the design, installation, commissioning, handover and maintenance of fire detection and systems.